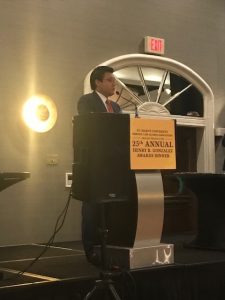 “I am really deeply honored to receive the award,” Herrera said. “It’s deeply humbling. I wasn’t expecting it when I got the call. I was pretty well shocked, especially given that I’m a little bit younger than most of the other awardees. I was definitely taken aback.”

A 2010 graduate of St. Mary’s Law School, Herrera has remained involved with his alma mater. He is a member of St. Mary's University School of Law’s Hispanic Law Alumni Association and the Law Board of Visitors.

This is not first time the law school has honored Herrera. Last year, the law school named Herrera to its inaugural “10 Under 10” class for outstanding achievement by recent alumni. The awards recognized 10 exceptional alumni who had graduated from St. Mary’s Law School between 2007 and 2016.

Herrera has served as a mentor to students at St. Mary’s Law School for several years. “I have made sure to give back to St. Mary’s,” he said. “It’s what we were taught to do from my father and from the university,” added Herrera, referring to his father, attorney Frank Herrera Jr., a 1967 graduate of St. Mary's University School of Law and the founder of the Herrera Law Firm. “We were taught to commit to service. It just really comes naturally.”

Being a mentor often involves meeting with students and hosting events. “I’ve offered my services to help whenever somebody needs help looking for a job and giving them the best advice” Herrera said, added that he has also served “on panels, talked with students and participated in networking events.”

“They (law school students) have been really thankful,” Herrera added. “A lot of the students don’t really know what comes next or how to network or how to market themselves. I really think that’s what I’ve been able to help them do.”

Personally, Herrera said his father was his mentor in law school. He added he also learned a lot in law school by “being unafraid of asking questions and questioning why things had to be a certain way. A lot of it was figuring it out on my own, but I did have friends around my age that I could bounce ideas off.”