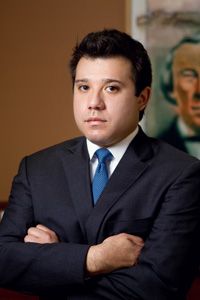 "It's an honor to be acknowledged by St. Mary's University School of Law," Herrera said. "I work tirelessly on behalf of injured victims and their families throughout Texas. And I have to thank the university for providing me with the education to do the work I do every single day."

An awards luncheon will be held March 31 from noon to 1 p.m. at the university's Alumni Athletics & Convocation Center as part of the university's Law Weekend and Reunion. Reservations to attend the luncheon can be made online.

While in law school, Herrera served on a variety of boards and participated in a number of activities, including serving as a member of the Board of Advocates, the Hispanic Law Student Association and the St. Mary's Mock Trial Team and also participated in both the Civil Justice Clinic and Criminal Justice Clinic.

Javier Herrera's commitment to St. Mary's University continues to this day. Currently, he serves as a member of both the university's Law Board of Visitors and the Hispanic Law Alumni Association.

Javier comes from a long line of attorneys in his family committed to fighting for the rights of people in San Antonio and throughout the state. Herrera is the youngest son of Frank Herrera Jr., a 1967 graduate of St. Mary's University School of Law, and works alongside his brother, attorney Jorge A. Herrera.

Javier Herrera is licensed to practice law in the southern, eastern, northern and western District Courts of Texas, allowing him to practice law throughout the entire state in Federal Court.