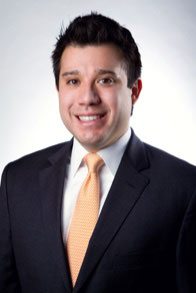 "The law is where I truly can help the most people.”

Javier Herrera is the younger son of Frank Herrera Jr., founder of the Herrera Law Firm and brother to Jorge Herrera, an associate lawyer in the firm.

In 2000, Javier graduated from Boston College with a bachelor of arts in psychology. While attending Boston College, Javier continued his family’s legacy of promoting equality and justice, and became a member of the AHANA/ALANA (a word created by the Boston College community representing those of African, Hispanic/Latino, Asian, and Native American descent) Leadership Council. Javier continued his passion for diversity and became a director in the Student Admission Program for AHANA Student Recruitment to Boston College. Javier also helped the few other Texan students acclimate by reinstituting the Texan Student Luncheon – a meal for those who were far from home and needed some good Texas Bar-be-que.

Later, he went on to the University of Chicago-School of Social Services Administration, where in 2007 he received his master of arts focusing on community planning, organizing, and development. The lessons learned while he received his master’s furthered his desire to promote equality and justice for those who need a voice. Upon graduating from the University of Chicago, Javier returned home.

In San Antonio, he attended his father’s alma mater, St. Mary’s University School of Law, and graduated in 2010, where he was a member of the Board of Advocates, the nationally recognized St. Mary’s Mock Trial Team, the Hispanic Law Student Association, and committed two years to serving clients in the St. Mary’s Center for Legal and Social Justice, where he served in both the Civil Clinic and Criminal Clinic defending the rights of those who could not afford an attorney.

Javier’s passion for justice and equality has been a part of his family’s tradition and legacy for decades. He was taught that it does not matter where you go in life, but that you always remember where you come from and the people who helped you along the way. He continues alongside his father and brother, serving clients from all walks of life and ensuring that courthouse doors remain open.

Javier is licensed to practice law in the following jurisdictions: