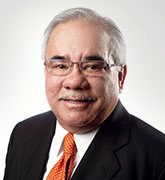 The Herrera Law Firm, Inc. founder Frank Herrera Jr. was named one of the 25 most influential Hispanic lawyers in the United States by Latino Leaders magazine for 2016.

According to the magazine, the attorneys on the list were selected in part because of their dedication to their professions and commitment to their communities.

"It is a great honor to receive this recognition from Latino Leaders magazine," Herrera said. "When I started my career, my goal was to fight for the underdog in the courtroom and in the community. I hope I've done my part over the years to make San Antonio a better place to live and work for everyone."

Herrera, who practices in the field of personal injury, clearly brings great passion to his work on behalf of clients and on behalf of the Hispanic community in the San Antonio area. He has devoted time and resources to many causes, including the Mexican American Legal Defense and Educational Fund (MALDEF). He is 2014 chairman of the board for New America Alliance and chairman of the board and managing partner of Valiente International Ventures. In addition, he continues to remain active with many charitable organizations and events.

Herrera is the first and only Hispanic supplier to form a joint venture with Toyota Tsusho America Inc., an international trading company for Toyota Corp.

According to Latino Leaders, "Our research effort aims to showcase the most influential Latino Lawyers in the Country. This is not a merit based list; is actual power, relevance and success rate."

The magazine over the years has featured Hispanic leaders across a variety of fields, including star athletes, politicians and business owners. The magazine strives to put a spotlight on the achievements of Latinos.

Frank Herrera is not the only attorney at the firm to be recently honored. The San Antonio Trial Lawyers Association recently presented partner Laura G. Tamez with the Pat Maloney Sr. Courage Award. She was the first woman to receive the prize. Attorney Jorge Herrera, son of Frank Herrera, was selected to receive a 2016 40 Under 40 award, presented by the San Antonio Business Journal. He was recognized Feb. 11 during a ceremony at the Norris Conference Center in San Antonio.