After 18 years in the same location, The Herrera Law Firm is marking a new era of growth and community involvement by moving their office to the West Side of San Antonio. 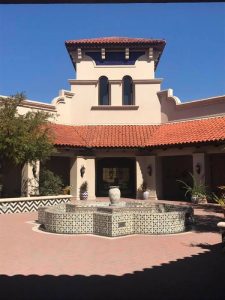 The new office will be located at 1800 W Commerce St., in a building that once housed a branch of the failed First National Bank. The firm bought the building in 2014 with plans to relocate there after their current lease expired this year. The building is now called “Herrera Plaza.”

“We are beyond excited about moving into the neighborhood, and becoming a true, integrated member of the community,” said attorney Frank Herrera Jr., founder of the firm.

Herrera said the firm views the move as an important step in helping to energize the community.

San Antonio residents know all about the “Pearl.” But Herrera calls the new building “The Ruby of the West Side” – a reference to the untapped potential of the neighborhood. Herrera expects the firm’s move to help spur community development in the area, noting there has already been significant interest.

But though the practice is just now moving its offices, the building has hardly been unused. It’s been the site of numerous events and fund-raisers by groups including the Mexican American Bar Association, St. Mary’s University Hispanic Law Alumni Association and a local SAISD PTA, to name a few.

He said the building has also been used as a base for political change, serving as campaign offices for candidates for local and federal office.

The move gives the firm room for its continued growth, said attorney Jorge Herrera, who is also president of the firm. He noted the practice has added employees and expanded its mass tort/medical device docket. And he said it also marks a new era in the firm’s history. The elder Herrera founded the firm in 1983, and much of the business has now been passed along to sons Jorge and Javier.

“I’m proud to carry on the legacy my father has built, along with my brother and our other law partner, Laura Tamez,” said Jorge. “We will continue to fight for hard-working families in our community.”

But their father is still involved in the community and the law. In addition to celebrating the new move, this year the firm is also celebrating Frank Herrera’s 50th year of practicing law.

“I love the law and will continue to litigate cases until the good Lord says otherwise,” Frank said.

About The Herrera Law Firm, Inc.

Founded in 1983, The Herrera Law Firm, Inc., has successfully represented thousands of individuals and families who have been dealt catastrophic blows due to personal injuries from car accidents, construction/oil field accidents, work injuries and 18 wheeler wrecks, and other forms of negligence. The law firm’s mission is to rectify the wrongs committed against its clients so that they can regain their dignity, rebuild their lives, and reclaim financial stability.