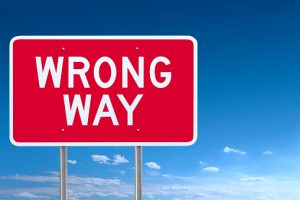 Wrong-way driving causes serious injuries to Texas road users. It may not receive the same amount of attention as drunk driving, drugged driving, distracted driving, or other common driving dangers, but it can be even more deadly.

Wrong-way drivers often cause head-on collisions at high speeds. This is why technology developers and government transportation authorities are working together to reduce wrong-way driving.

The Federal Highway Administration reports that approximately 300 to 400 victims are killed in wrong-way driving accidents across the United States every year. This is about one percent of all traffic fatalities. The United States Department of Transportation still considers this a serious problem, because wrong-way driving accidents tend to cause more severe injuries than other types of accidents. This is because they often involve head-on collisions or opposite direction sideswipes - both of which generate significant force and in turn cause more serious injuries.

Federal, state, and local transportation authorities are exploring many different solutions for reducing wrong-way driving. In Arizona, a $3.7 million pilot project has been approved to implement wrong-way driving countermeasures on freeways in the Phoenix area. According to AZCentral, these measures will include thermal detection cameras that can identify wrong-way drivers. The thermal cameras will then allow alerts to be sent to both law enforcement authorities and to drivers in the area through digital freeway signs which can be programmed with alert messages.

The Arizona Department of Transportation reports that this will be the first such use of thermal cameras in the United States. The system is believed to be more efficient than 911 calls reporting wrong-way drivers, which is how most current cases of wrong-way driving are identified.

Wrong-way driving is more than an abstract statistic. Real Texas families suffer devastating losses as the result of injuries and death caused by wrong-way drivers. Here in San Antonio, a wrong-way driver was killed after crashing into a concrete barricade. News 4 San Antonio reports that the man was driving in the wrong direction near Sea World before crashing head-on into the barrier. Emergency medical personnel pronounced him dead at the scene.

Our San Antonio car accident lawyers know the devastating losses caused to victims of wrong-way drivers. These victims have the legal right to be compensated for their injuries and losses. It is also important to hold wrong-way drivers accountable for their negligence in order to deter other drivers from causing similar accidents in the future.