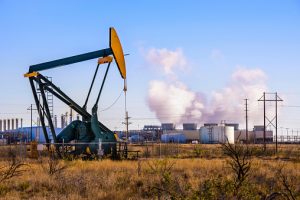 The Permian Basin of Texas is the state’s oil hub. Nearly a century ago, oil was discovered in the small town of Midland. After oil was discovered, the region – which includes the neighboring town of Odessa - saw an economic boom that attracted workers from everywhere. Highly traveled roads and construction quickly encompassed the once barren landscape. The oil industry attracted businessmen from all over the world.

But over the years, the Permian Basin has seen its share of highs and lows as it faced challenges posed by the Great Depression, foreign oil markets and drops in crude oil prices. By 2016, the region became a post-oil ghost-town. Jobs were lost, offices abandoned, and once-bustling highways became less traveled as unemployment hit an all time high.

However, a 2016 report released by U.S. Geological Survey estimated that roughly 20 billion barrels of oil, “undiscovered but technically recoverable,” could be buried beneath the Wolfcamp Shale of Midland. It is estimated that the amount of oil residing in the Permian Basin will be enough to fuel the average car for 9.6 trillion miles – but would take about 30 years to extract. With U.S. crude prices just below $50 a barrel, the region is set for another oil boom.

What does an oil boom mean for the Midland/Odessa area? With the economic upsurge, comes an influx of workers traveling to and from their destinations. Interstate 20 becomes congested with oil tankers and commercial trucks. While the Midland/Odessa area reaps the benefits of the economic upturn, residents and motorists face a new danger – an increase in traffic accidents.

That’s exactly what happened during the last boom, which took place between 2010 and 2016. Officer Aaron Smith of the Midland Police Department discussed the nature of these oil booms and the consequences it has on the area roadways. “When you increase the amount of traffic, inevitably it’s going to increase the amount of crashes that we see,” Smith said.

A recent Midland crash report documents the rise and fall of crash rates during that period.

The report also shows a sharp increase in crashes in 2017, the beginning of the current oil boom. There were 3,755 accidents with 1,403 injuries and 18 deaths.

Solutions to the problem

In order to keep up with the current oil boom, area drilling companies are in dire need of truck drivers. However, many truckers who lost their jobs after the last oil bust are no longer interested in returning to the industry. The trucker shortage could pose a real danger to area motorists. Oil drillers will likely hire inexperienced, unqualified drivers to meet the demand. Additionally, higher oil production will put pressure on drivers to deliver oil faster, which could result in speeding or skipping mandatory rest breaks.

The area has already experienced a recent increase in truck congestion on Interstate 20 as well as local routes. In response to concerns expressed by Odessa residents, the city has passed an ordinance banning semi trucks and trucks with tandem axles within the city limits. This means that large trucks will only be allowed to drive on Interstate 20 and Loop 338. In order to reach a destination or delivery point within Odessa, they must only take the shortest route possible.

The downside to this ordinance is an increase of highway truck traffic, which can put motorists traveling on Interstate 20 and Loop 338 at a higher risk of a serious motor vehicle accident.

What you can do to stay safe

The increase and decrease of traffic in greater Midland/Odessa has always come in waves. Oil booms turn roadways into a jumble of passenger vehicles, commercial trucks, oil tankers and semi trucks. It’s important that motorists and truckers follow safety precautions when taking to the roads of Midland and Odessa.

Practicing these safeguards can greatly reduce your chances of being injured or killed in a crash. However, that doesn’t guarantee that others will drive safely and responsibly. If the actions of a negligent motorist or truck driver caused your crash, you may be wondering what to do next. You could be severely injured and forced to spend time away from work to undergo a lengthy, expensive recovery.

The roads of the Permian Basin can be dangerous during an oil boom. That’s why you should seek the advice of an experienced, Texas truck accident attorney. For more than 30 years, Herrera Law Firm has helped injured motorists maximize their compensation and get the right care. We work on a contingency fee basis. That means you don’t pay unless we win.

Contact us today for a free, confidential case evaluation. We’re ready to fight for you every step of the way.