Our Texas law firm offers our condolences to the victims 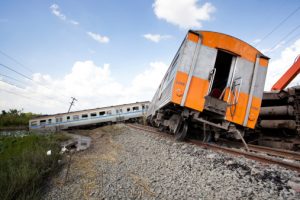 A charter bus carrying passengers from the Austin, Texas area was struck by a freight train in Biloxi, Mississippi on March 7, killing four and injuring dozens of others.

"Our thoughts and prayers are with the victims of the Biloxi crash and their families," said San Antonio attorney Frank Herrera, Jr., whose law firm represents accident victims throughout Texas. "We've seen firsthand just how deeply lives can be altered by tragedies such as this one, and we hope for a speedy recovery for those injured and a thorough investigation that will prevent future collisions."

The crash happened at about 2:14 PM when the bus became stuck on the Biloxi train tracks. An eastbound freight train, traveling from New Orleans to Mobile, hit the bus approximately a minute after it became stuck on the tracks. The bus was pushed several hundred feet, with many victims trapped inside.

51 people were on the bus when it became trapped on the tracks. Several passengers toward the back of the bus were able to escape before the collision happened. Even so, it was a chaotic scene with first responders still pulling people from the wreckage 30 minutes later. In total, 35 people were taken to area hospitals, and four died, including two retired school administrators from Lockhart, TX.

As is typical in accidents involving a significant size disparity between the vehicles, no one on the train was hurt. Unfortunately, it seems likely that negligence on the part of the railroad may have played a part in the bus passengers' injuries.

The cause of the crash is still under investigation by the National Transportation Safety Board (NTSB). But one significant concern has already been raised by the NTSB: This was the second accident at the same crossing in the span of two months. It's not clear what it is about this particular intersection that may have contributed to this tragedy, but such a pattern demands a thorough investigation.

Most of the passengers on the bus struck March 7 were members of the Bastrop Senior Center, located east of Austin. Senior citizens are among the most vulnerable members of our society and each one of them has dozens of friends and family who were affected by the crash.

Our legal team's thoughts and prayers are with the victims of this horrific crash and the families of those who died. We wish the survivors a speedy recovery and hope the NTSB's investigation will help prevent similar tragedies in the future. The Herrera Law Firm remains committed to fighting for the legal rights of victims and holding negligent parties accountable when their actions lead to severe injury or loss of life.