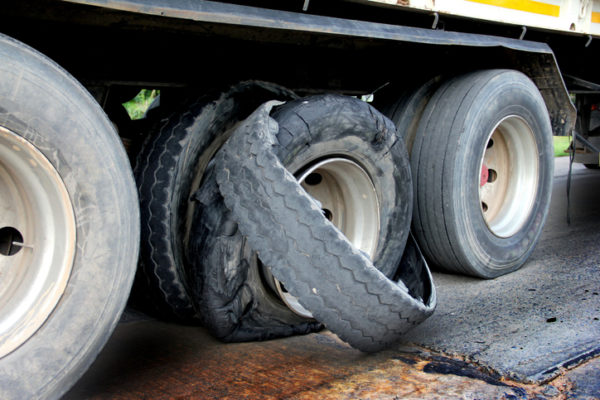 If an 18-wheeler hit your car due to a blowout, here's what you need to know

A recent fatal truck accident in San Antonio occurred due to a tire blowout on an 18-wheeler on Interstate 10, according to KSAT News. The accident occurred shortly after 5 p.m. on April 13, 2022, in the 11900 block of I-10 in San Antonio near De Zavala Road.

The fiery crash involved a big rig hauling gravel north on I-10. According to the San Antonio Police Department, the tractor-trailer had a tire blowout, which caused the truck to swerve and hit several vehicles.

During the collision, one car hit a concrete barrier in the middle of I-10. The vehicle on top of the barrier continued traveling forward and then hit a metal pole. The driver of the car was ultimately taken to a nearby hospital, where he later died.

Tragically, accidents like this happen far too often in Texas and states across the nation. Frequently, it's due to the negligence of a trucker or trucking company.

What is a tire blowout accident?

As the name suggests, tire blowout accidents occur when a tire explodes and loses all its air at once. Such accidents can have serious consequences since the driver often immediately loses control of the vehicle.

Tire failure is a common cause of motor vehicle accidents. Each year, an estimated 33,000 accidents nationwide occur due to tire failure. Of those crashes, an estimated 2,000 accidents involve tire blowouts, according to statistics compiled by the National Highway Traffic Safety Administration (NHTSA).

Tire blowout accidents result in an estimated 200 fatalities each year nationwide, according to the NHTSA.

As for tractor-trailers and other large commercial trucks, tire blowouts lead to a lot of accidents as well. According to the NHTSA, truck tire blowouts cause an estimated 200 accidents and more than 220 fatalities on average each year.

Such numbers are reflected in commercial vehicle violations discovered by the Federal Motor Carrier Safety Administration (FMCSA) during roadside inspections. Many of the most common violations involve truck tires, including:

Tire blowouts usually don’t happen by chance. In many cases, they are the direct result of someone's negligence. Common causes of 18-wheeler accidents involving tire blowouts include:

Who is liable for an accident due to a tire blowout?

Likewise, if there's evidence to show that the tires on the truck were faulty due to a manufacturer defect, then you could pursue compensation from the tire manufacturer. This is why it's in your best interest to talk to a truck accident lawyer about your legal rights and options. An experienced attorney will be able to identify all potential sources of compensation and hold all negligent parties accountable for their actions.

You might think you don’t need a lawyer if you were involved in a crash with a commercial truck and your accident is being investigated by the Texas Highway Patrol or the National Transportation Safety Board (NTSB).

But the reality is those investigations only focus on whether any state or federal truck laws were violated, not whether you are fairly compensated for your losses. That's where we come in.

At The Herrera Law Firm, our philosophy is: "Winning isn't luck. It's knowing how to fight." That means our attorneys have the knowledge, experience, and resources to aggressively advocate for your best interests in settlement negotiations, or, if necessary, in court after filing a lawsuit. We know how to build winning truck accident cases in Texas, and we know how to work for the outcome your case deserves.

Put your trust in a law firm that puts your needs first. Contact us today for a free case evaluation with a San Antonio truck accident attorney. Our office is located on West Commerce Street in San Antonio and we handle truck accident claims throughout Texas.

"Very pleased with how Javier took care of my case. He took the time to explain all the details of what to expect next regarding my case. Javier and his staff were always very helpful. He exceeded my expectations as to how he handled my case. You won't go wrong with choosing Herrera law firm to win your case. Highly recommend to anyone needing a personal injury lawyer." - Google review by L. Salinas