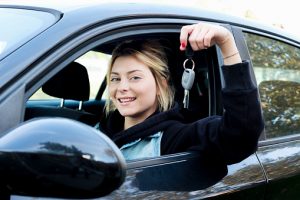 Three Houston teenagers were killed recently in a tragic accident on their way home from a spring break trip. The tragic accident illustrates two of the most significant dangers for young people: distracted driving, and having multiple passengers in the car.

The accident occurred when the teen's car veered off of a highway as the driver was checking her GPS. She subsequently drove the car directly into an oncoming 18-wheeler. A 19-year old, her 17-year-old sister and an 18-year-old friend were killed in the accident. There was also a fourth passenger, an 18-year-old, who was critically injured but who the NY Daily News reported was in stable condition following the accident.

It was not immediately clear who was driving at the time when the accident happened, and officers were conducting an investigation into the crash. The truck driver who the girls' vehicle struck was not hurt in the incident.

Teenagers are at the greatest risk of getting hurt in motor vehicle accidents of people in any age group, and car accidents are a leading cause of teen deaths. Distracted driving, in particular, is the number one killer of teenagers within the United States, according to the Texas Department of Public Safety. Teenagers who apply for a driver's license in the state of Texas are now required to take a course about distracted driving to learn the risks.

The use of electronic devices, like GPS devices, is a common cause of accidents as these devices cause drivers to take their focus off the road, just as occurred in this recent tragic crash. However, there are also other sources of distraction teens and their parents must be aware of as well.

The study reported on by CBS involved putting cameras into the vehicles of teenagers to observe their behavior. The research revealed the risk a teen would have to make an evasive maneuver to avoid an accident was six times greater when a teenage driver has passengers in the car with him who were talking loudly and was three times greater when teens has passengers in the car who were horsing around.

By placing restrictions on how many passengers - if any - a teen driver is allowed to carry, it is possible that accidents such as this recent tragedy could have been prevented.